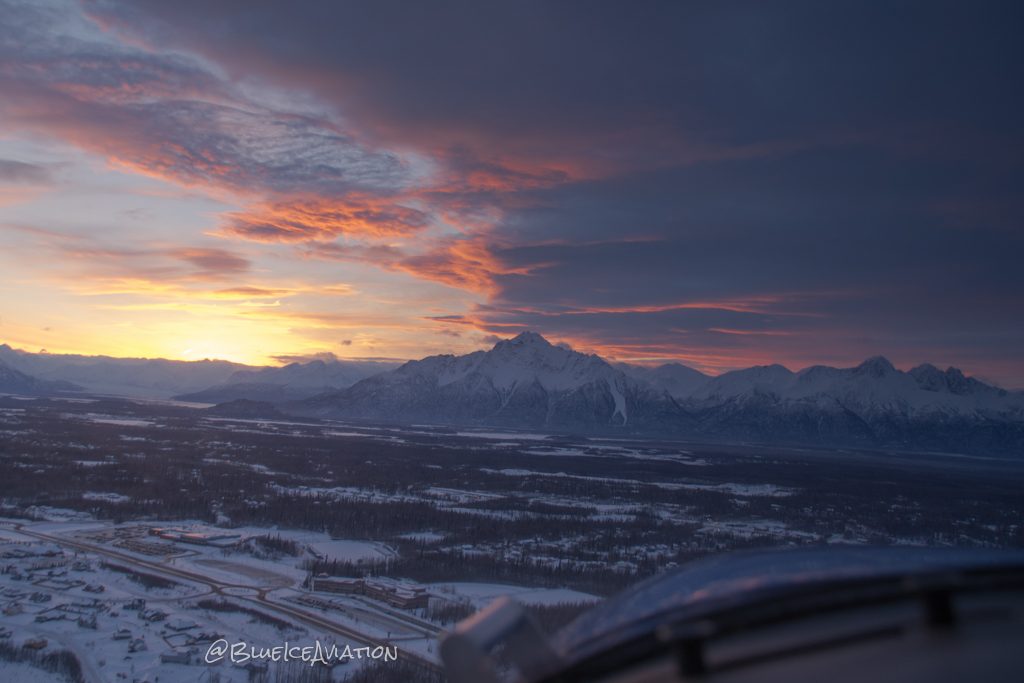 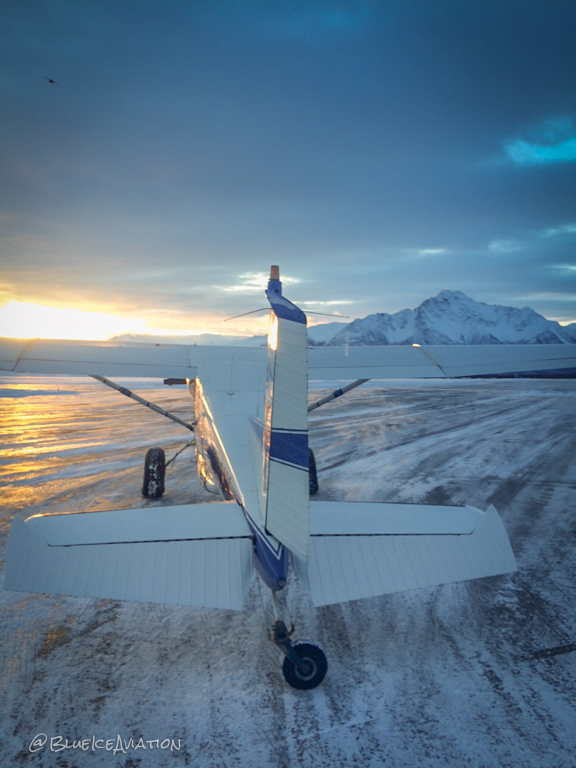 I took these pictures this morning.  It was an absolutely beautiful sunrise, but a little-bit windier than I would have preferred. The winds in Palmer we’re not supposed to pick up until 4 PM this afternoon but by 9 o’clock this morning it was already gusting to 20 knots.  I took the sunrise picture enroute to the Palmer Airport this morning and I took the other photo while sitting on the ramp at Palmer just before departure.

You might notice that the ground looks a little slippery. It was.  The Alaskan Bushwheel is probably the finest modification available for Bush aircraft.  But I am pretty sure that an AKBushwheel on snow or ice is literally the most slippery thing in the world (with the exception of wearing crocs on wet polished concrete…but that’s just dangerous).  I think braking with Bushwheels on snow might actually make you go faster.  I eagerly await the day they introduce the studded, or even siped version of AK Bushwheel, better yet, how about a set of chains.  That would be awesome.

But anyways, I was not too concerned about the braking action on my 185 with 6000′ of Palmer Municipal in front of me.  It was not concerning until I needed to exit the runway on glare ice.  Here’s the point, maneuvering a Bushwheel equipped, Cessna 185 on ice, in a 20 knot wind is totally humiliating.  The vertical stabilizer is the size of barn door and once the wind has control of that beast, you are hooped.  More than once I’ve had to shut down on the runway and turn the thing by hand.  And that is not as easy as it sounds.  Just about the time I’d get some traction under my feet, and the old-girl would start to move, my feet would shoot-out and my chin would contact the empanage.  It’s infuriating and hopeless.

This is where blog writers are supposed to have a brilliant solution.  I don’t.

I did think this morning how cool I would have felt with a set of those stretchy rubber ice cleats.  The only thing better would have been a passenger with ice cleats.  Then you can kick their butt out to “hang on a strut” while you power around.  Truth is I exited the runway with no issues this morning, but it brought back several memories I had tried to bury.  After I successfully taxied off the runway and shutdown, I began contemplating a straight ahead ramp departure.  But those are not things we are allowed to discuss on a blog.  So, I turned the airplane around by hand before starting the engine and taxiing for departure.  The problem with turning your back to the wind before climbing in, is making sure you don’t get your door ripped off it’s hinges in the process.  I made a mistake like that once down on Unimak Island.  That was very stressful, and relatively expensive, and frustrating.  But that is a story for another time.  I hope you get out and do some winter flying.  It is full of odd challenges, and good times.